In general, we all pretty much assume that the things we buy are safe—safe to use, safe to eat, safe to put in or around our bodies and even safe to be used on our bodies, like the devices used in medical procedures. We trust that companies, with a little help from federal safety oversight agencies, will do what it takes to provide us with products that are thoroughly tested and cleared for consumer use.

But at every turn, it seems, this trust is more and more displaced. From listeria-tainted ice cream to airbags that shoot metal shrapnel at passengers and even defective medical devices; products that you’ll likely never see, but that you have to trust implicitly to function correctly. When these malfunction, it’s your life that’s often put at risk.

With such immediate and resounding consequences, you’d think that medical devices would be scrutinized more than just about any manufactured product; subjected to test after test before being released for use in and on the public. But that’s just not the case.

Take this warning letter published on the U.S. Food and Drug Administration’s website on May 4, 2015. It’s addressed to medical device manufacturer Smith & Nephew, Inc. and it calls out a number of significant violations found by an FDA investigator regarding the company’s TRUCLEAR ULTRA Reciprocating Morcellator 4.0., a surgical instrument often used in gynecological surgeries such as uterine fibroid removal and hysterectomies. Specifically:

Probably the most frightening part of this letter, for me, is that a number of these violations took place almost three years ago. In the meantime, the device was available for use in some fairly common surgical procedures.

What if this sterilization process didn’t work on the reworked morcellators and a woman undergoing a simple fibroid removal surgery contracted a deadly bacteria? Or what if the new design changes on the device caused the morcellator to fail during surgery?

And what if these things did happen, but weren’t linked specifically to the device’s allegedly negligent manufacturing process?

It’s worrisome, to say the least, and it’s only one example of a problem that seems to be growing worse by the day: the lack of sufficient safety measures and oversight on the part of product manufacturers. 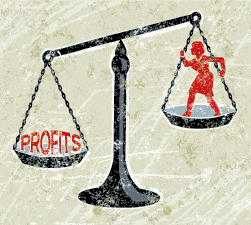 While there are agencies such as the FDA in place to help safeguard against defective products entering the market, they are not invincible. The responsibility of creating a safe product is in the hands of the person or company who makes it, and when they fail, we, the consumers, are the ones directly impacted.

Unfortunately, it typically takes a defective product hitting the market and harming people before any potential issues in the manufacturing process or product testing are addressed by the company.  As a fellow consumer, I would urge two things: that we advocate for greater oversight on the part of the companies themselves instead of pushing even more of a burden on already overburdened governmental regulatory agencies, and that we keep our ears and eyes open and ask questions at every opportunity.

When “profit margin” is the mantra of so many major companies, we have to assume that our health and safety is not always at the top of the priority list. And the only way we can change that is if we demand better safety and oversight from the start.