The Soul of our Practice…Our Clients

When Thoreau said, “The mass of men lead lives of quiet desperation,” maybe he was thinking of lawyers. Many lawyers get tied up in their careers, but find no joy in their work. As an attorney, the joy I’ve found in my work comes from being able to help people and seeing how it truly makes a difference in their lives.

I’ve been a lawyer for long enough to have done a little bit of everything from representing state agencies to dealing with disastrous divorces and sending criminals to jail. People have told me their most secret secrets, kids have whispered their fears about parents splitting up, and I’ve even crawled through the window of a hoarder’s house over mounds of garbage to get to a lady that the court asked me to protect. I’ve found satisfaction and much joy in helping my clients, and among those that have touched my heart the most are the victims of asbestos exposure.

If ever there was a betrayed class of people, a group that has suffered great injustice, it is asbestos victims and their family members. As they went through their lives, they were unaware that a silent and invisible enemy was stalking them and would reveal harm from which they would have no escape.

I’ve heard dozens of stories from our clients, mostly men, who tell of their humble beginnings and how they worked with their hands from a young age. It was a great accomplishment to gain membership in a union, often following in their father’s, grandfather’s and even great-grandfather’s footsteps. Most began as laborers, a position that took them all over a huge plant to do the work that no one else wanted to do. They spent their days cleaning out ash pits under hot furnaces or delivering rolls of asbestos to installers. They swept dust on the floors, unaware that, like an unseen serpent, that chore would one day strike them with deadly results. They spent long hours in vast spaces where temperatures vacillated from air so cold it froze their breath to the almost unbearable heat roaring from the mouths of the huge, open hearth furnaces in many of these facilities.

These men talk proudly of progressing from laborers to millwrights, boilermakers, operators or supervisors. Some of them went to trade school and became electricians, mechanics or plumbers. They received union cards denoting their new status and proudly carried these in their wallets. I’ve seen one of these in the hands of my own father who at 83 is still proud that he earned his electrician’s card in the dusty underbelly of a deep coal mine in Pennsylvania. 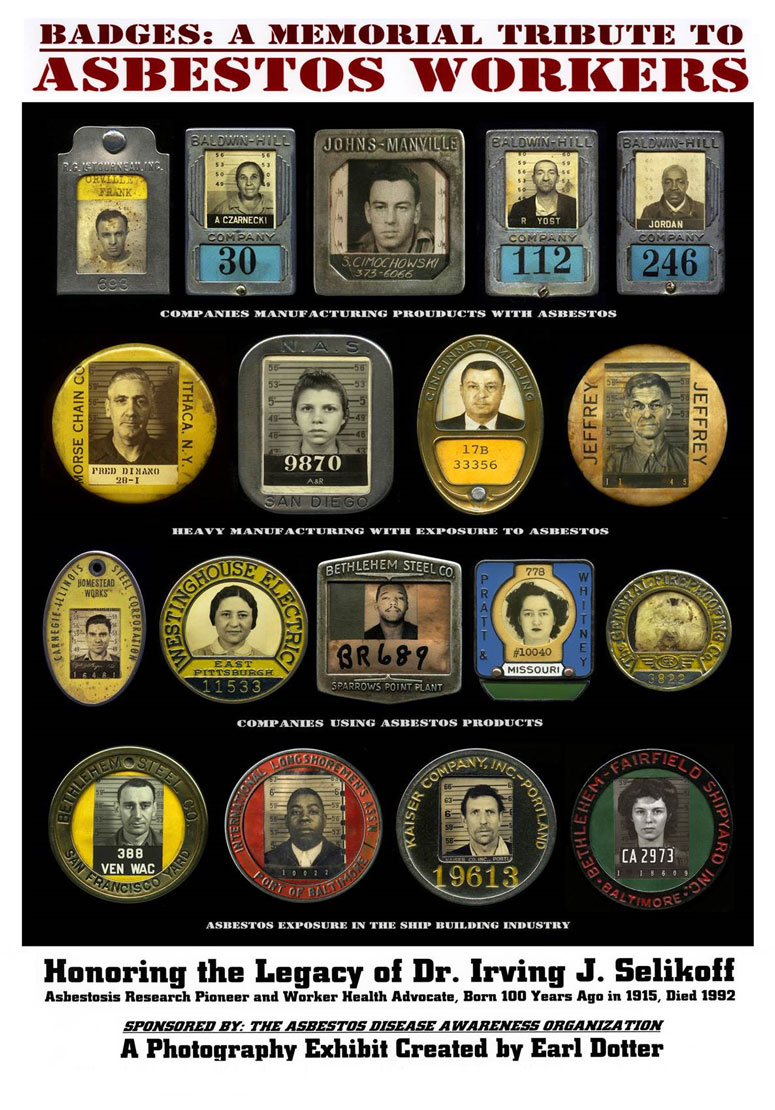 The thin metal badges that many of them wore, many featuring their portrait and the name of the industry giant that they worked for, were also a kind of badge of honor. Yet I wonder how many workers look at their cards or badges today and shudder or grieve for the good health they gave to earn it, or, similarly devastating, the secondhand exposure and resulting asbestos-related diseases that some of their loved ones, spouses, children and grandchildren, are also being diagnosed with as a result of simply wearing their work clothes home, coated with asbestos fibers.

Where was the “transparency” for asbestos workers?

Today, some law firms who defend asbestos companies are supporting and helping to pass bills that demand “transparency” in plaintiffs’ claims against them, demanding that victims disclose large amounts of personal information and, as I read it, further delaying any help to them by demanding useless and burdensome new requirements.

If the defense is going to bring up issues of transparency, I would ask them where the companies’ “transparency” was when it came to the lack of warning about the dangers of asbestos? Or what about the conspiracy of silence for decades that masked deadly dangers in the lives of workers and their families? What about the ultimate betrayal to those who only wanted to support their families?

It’s bad enough to be sick, but asbestos victims often also face financial problems as their health forced them to quit working before they were ready. They live on social security and pensions if they’re lucky, which to me are woefully inadequate and much less than they deserve. This is what they get for their years of labor and devoted service. Their loyalty to their company is repaid with a death sentence and a life filled with sad regret as they struggle to survive.

Asbestos victims, their families, their spouses and their widows have suffered more pain and loss than anyone should ever have to endure. It’s my hope that they can find some comfort in the fact that they are not alone, that others are sharing in this fight and that there can be some measure of relief at the end of these dark and difficult times as we work every day to hold asbestos companies accountable to the full extent of the law.