Motley Rice co-founder Joe Rice was appointed by the Court to the Plaintiffs’ Steering Committee (PSC) and has played a leading role on the PSC’s negotiating and financial committees responsible for the $14.7 billion “Clean Diesel” settlement for owners of 2.0-liter TDI vehicles, the largest auto-related consumer class action in U.S. history, and the $1.2 to $4.4 billion settlement for owners and lessees of 3.0-liter Audi, Porsche, and Volkswagen TDI vehicles. Joining him in the negotiations were Motley Rice attorneys Ann Ritter and Andrew Arnold.

For more information on the settlement programs and deadlines, visit www.vwcourtsettlement.com  and www.boschvwsettlement.com/en.

Motley Rice attorneys have experience in vehicle defect cases and have held leadership roles in similar litigation, including most recently with General Motors’ ignition switch defects and recalls and Takata’s exploding airbags.

On Oct. 25, 2016, U.S. District Court Judge Charles R. Breyer of the Northern District of California approved the nearly $15 billion 2.0-liter settlement deal to compensate consumers and mitigate the impact Volkswagen’s actions had on the environment. Roughly $10 billion will be paid to consumers to buy back and repair around 482,000 affected Volkswagen and Audi 2.0-liter TDI vehicles that were owned or leased as of Sept. 18, 2015. An additional $4.7 billion will mitigate the environmental impact of the excess emissions, including $2.7 billion to be paid into a trust to support environmental programs across the country that will reduce NOx in the atmosphere by an amount equal to or greater than the combined excess NOx pollution caused by the affected vehicles. The remaining $2 billion will be used to develop additional, new, clean technology.

The settlement agreement allows eligible owners, eligible sellers and eligible lessees the option of a buyback, having their car modified to reduce emissions. Claims for 2.0-liter diesel vehicles must be filed by Sept. 1, 2018. For more information, including the full settlement program filing, visit www.vwcourtsettlement.com.

On Jan. 6, 2017, the California Air Resources Board and the Environmental Protection Agency approved an emissions modification for roughly 70,000 “Generation 3” 2.0-liter Volkswagen and Audi vehicles released in model year 2015. The vehicles, which previously emitted NOx up to 40 times the standard level, are now able to be installed with a second NOx sensor and a new or replacement diesel oxidation catalyst that is said to reduce NOx emissions by 80 to 90 percent.

On July 27, 2017, the EPA and CARB announced their approval of VW’s proposed modification for 326,000 2.0-liter diesel engines. According to VW, the announcement means that an approved modification is now available for more than 98 percent of eligible 2.0-liter TDI vehicles in the U.S.

Read more on the modification for affected Volkswagen vehicles.

Read more on the modification for affected Audi vehicles.

The below shows which steps to take for the buyback option and the emissions modification option: 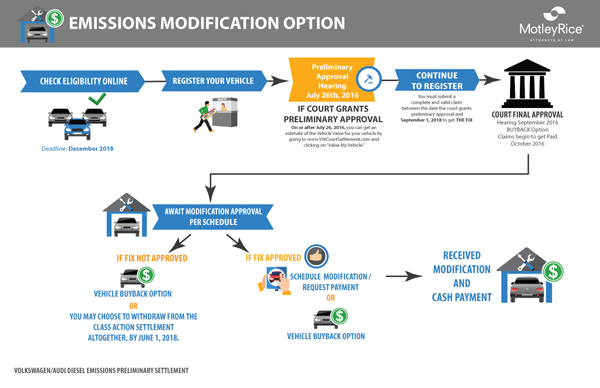 On May 17, 2017, Judge Breyer approved a $1.2 billion settlement (that could potentially increase up to $4.4 billion) to resolve claims filed by current and former owners and lessees of 3.0-liter Audi, Porsche, and Volkswagen TDI, or “Clean Diesel,” vehicles. For more information and a break out of the terms, read Motley Rice co-founder Joe Rice’s blog about the terms.

German company Robert Bosch GmbH supplied the emissions software that was installed in some 2.0-liter and 3.0-liter Volkswagen, Audi and Porsche diesel vehicles. On May 17, 2017, Judge Breyer also approved was a $327.5 million settlement with Bosch. Bosch settlement payments will automatically be sent to owners and lessees who participate in the 2.0-liter or 3.0-liter settlement with Volkswagen once their claims are fully processed, unless they explicitly opted-out of the Bosch settlement.

On Sept. 18, 2015, news broke that German automaker Volkswagen has been programming more than 11 million vehicles worldwide, nearly 500,000 of those vehicles in the United States, to cheat on tests by emitting lower emissions levels in official tests than how they actually perform on the road. In its Notice of Violation to Volkswagen, the EPA stated that, "VW admit[ted] it had designed and installed a defeat device in these vehicles in the form of a sophisticated software algorithm that detected when a vehicle was undergoing emissions testing."

Michael Horn, CEO of Volkswagen Group of America admitted on Sept. 21, 2015 that, "our company was dishonest with the Environmental Protection Agency [EPA] and the California Air Resources Board, and with all of you. And in my German words, we've totally screwed up." He later testified on Oct. 8, 2015 before a House of Representatives subcommittee regarding the diesel emissions scandal. To date, 10 senior managers and four top engineers at Volkswagen have been suspended and an internal inquiry launched.

On Sept. 23, 2015, Volkswagen CEO Dr. Martin Winterkorn took responsibility for the defeat devices called out by the EPA for cheating vehicle emission tests and resigned. In his official statement posted on the VW website, Dr. Winterkorn stated, "Above all, I am stunned that misconduct on such a scale was possible in the Volkswagen Group." Following Winterkorn’s resignation, Matthias Mueller was later appointed as VW’s CEO.

On Nov.  2, 2015, the EPA announced additional charges against Volkswagen for violating the Clean Air Act. The EPA accused VW of using software to cheat emissions tests in about 10,000 additional cars, including 3.0-liter diesel engines in various VW, Audi and Porsche models.

On Dec. 8, 2015, the U.S. Judicial Panel on Multidistrict litigation said the more than 500 civil lawsuits filed to date against Volkswagen AG will be heard by U.S. District Judge Charles Breyer in the Northern District of California in San Francisco.

On Jan. 11, 2017, Volkswagen AG plead guilty to federal conspiracy and other charges in violation of the Clean Air Act and agreed to pay $4.3 billion in penalties. Several of the automakers top executives, too, face criminal charges in an ongoing investigation. Read the Department of Justice’s announcement.

Under the Clean Air Act, Volkswagen could have been fined as much as $37,500 for each vehicle in question, a possible total penalty of $18 billion. Additionally, VW now faces a criminal investigation by the U.S. Department of Justice just as General Motors did for faulty ignition switches. Read the EPA’s statement on the Clean Air Act Violations.

The Wall Street Journal (Oct. 2, 2015) – Bosch Could Get Drawn Into Volkswagen Emissions Litigation